Greenworx branches out with Mercedes-Benz Unimog from Lloyd Ltd

The versatile off-road truck is more than paying its way by performing the work of several other vehicles – it can power a range of attached implements and combines the rough terrain capability of a tractor with a 56 mph on road cruising speed.

Supplied by specialist Unimog Dealer Lloyd Ltd, the U430 model has a factory-fitted tipping body with aluminium dropsides. Its six-cylinder engine produces 220 kW (299 hp), and drives through an automatic gearbox which allows the driver to concentrate fully on the road and his implement attachments. The Dealer also provided a low-loader trailer, which Darlington-based Greenworx uses to move machinery and timber.

For brothers Brett and Ryan Skelton, who run Greenworx in partnership, the Unimog is simply the ultimate vehicle for their application. “Everybody in this industry wants one, and now I can really see why,” said Brett Skelton. 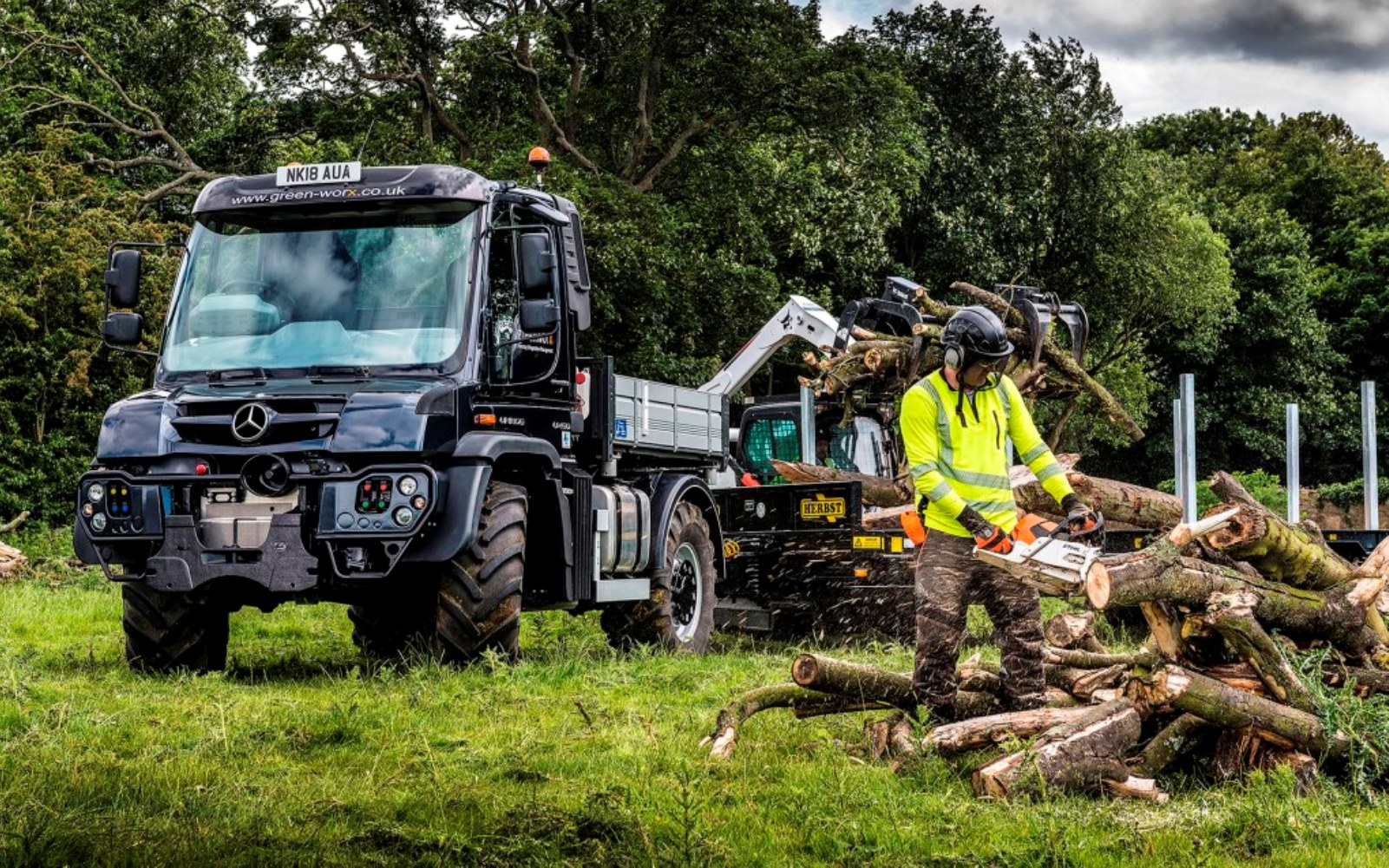 “We were using an agricultural tractor for on-site work, which was fine – up to a point. It was very capable on rough ground but the problem was getting it there. For jobs close to home you can drive on the road, but a tractor is slow and uneconomical. When working further afield we were having to pay a haulier to transport the tractor for us.

“With the Unimog, this is no longer an issue. It’s just as good on challenging ground but in a different class on the road. It will travel happily at 56 mph, using much less fuel than the tractor, and tow a heavily-laden trailer too.”

Mr Skelton continued: “We’ve recently been working on a site near Leeds, where the Unimog has really proved its worth. We were able to use this one vehicle to travel to and from the site, and do all the work when we got there. So we’ve not only replaced a tractor with a vehicle that’s much more fuel-efficient, but we’ve also done away with the need to buy in third-party haulage.

“Furthermore, the service intervals for the Unimog are much longer than for the tractor it has replaced, so we’re saving on maintenance costs too. Financially, it’s a no-brainer.”

The Unimog has another ace up its sleeve, because it is equipped to power a wide range of implements via attachment points at the front, side and rear.

“This means, for example, that we can attach a wood-chipper which discharges straight into a box on the back, while still leaving the vehicle free to tow a trailer,” observed Ryan Skelton. “The variety of things you can do with this one vehicle is huge.

“We’ve recently undertaken a detailed evaluation of all our operating costs, including haulage, with a view to looking at ways to make savings. Lloyd Ltd’s sales executive Andrew Hines played his part by spending a lot of time getting to know and understand our business, and working with us to demonstrate the efficiency savings we could make.

“Our investment in the Unimog is the culmination of that process, and the vehicle has proved so effective that we’re already thinking of adding another. It’s the base on which we can build the future success of our operation.”

The Unimog is drawing so much attention from passers-by that Mr Skelton says it’s also “worth its weight in gold” as a mobile advertisement. “Wherever we go people are stopping to take pictures or film it on their phones – we turn more heads than you would in a Ferrari!” he laughed. “The Unimog ticks every box, and more. It just makes perfect sense.”

The off-road heritage of the iconic Unimog stretches back more than 70 years. Since the first model was launched in 1946, constant development by Mercedes-Benz engineers has kept it at the forefront of the off-road pack and today it is widely acknowledged as the world’s leading all-terrain vehicle, with a reputation forged in the harshest operating conditions.

There are two core variants: an implement carrier with front, side and rear attachment points, and a base truck for a range of other bodies. All Unimogs have 4×4 chassis with single rear wheels, which follow the track created by the front wheels. Gross weights vary from 7.5 to 16 tonnes and engines from 156 hp to 300 hp.

From left, Ryan and Brett Skelton and arborist Ben Jopling, with their new Mercedes-Benz Unimog.

We use cookies to ensure that we give you the best experience and service. If you continue to browse this site without changing your settings, we’ll assume that you are happy to receive all cookies on this website. Find out more.